Drivers of high performance cars are feeling the pinch most with the higher octane fuels now costing between ten and twenty dollars more per tank than the lower octane fuels.  The temptation then is to pump a lower octane fuel than the manufacturer of your vehicle recommends to save money, but, this is a false economy as you will get poor fuel economy or worse knocking and engine damage from the cheaper fuels.

There are a number of after-market octane boosters available in the market but frankly the information about them is confusing at best and some of the claims made by the manufacturers are down right fraudulent.  X-1R manufacture a range of octane booster and so to be able to make accurate claims about the efficacy of our products we asked an independent testing house, Camin Cargo Control (CCC) from the USA, to test our products and compare them with some of the leading brands out there.

To maintain the reliability of the test, CCC went out and purchased all of the products, including our products, from local retail shops rather than obtain them from the manufacturers so the products tested are the actual ones being used by the consumers. The lab followed the recommended dosage stated on the label and mixed it with regular petrol purchased from the pump just like any regular motorist would.  CCC then followed accepted ASTM testing protocols for all samples.

Regular unleaded RON91 fuel has a rating of 91.7. For the layman, RON refers to Research Octane Number – the higher the number, the more detonation-resistant the fuel is. When the Gold Eagle, Lucas Oil and NOS octane booster brands were added to the RON91 fuel (refer Report 1 below), the fuel rating increased by 1%, 3% and 4.6% respectively. When it was X-1R’s Racing Octane Booster’s turn to be put to the test, the rating increased by an astounding 10.4 % to 101.2!

The report from CCC can be viewed below; we think the numbers paint a thousand words.  In Asia, X-1R has specifically formulated a three number booster for use in a handy 60ml format.  This product is designed to boost the local fuels by three numbers so a RON92 fuel becomes RON95 fuel and a RON95 will become a RON98 (and so on).

As usual, we wanted the proof that our clever chemists had produced a product worthy of the X-1R name so we asked INTEK testing labs in Singapore to test our claims.  Following the same protocol that CCC set up INTEK took some local fuel, added X-1R according to the instructions on the label and then followed ASTM testing protocols.  Again the results spoke for themselves (and also can be viewed below) where the local Petronas fuel went from 94.9 to 98.4 an increase of 3.5 RON. 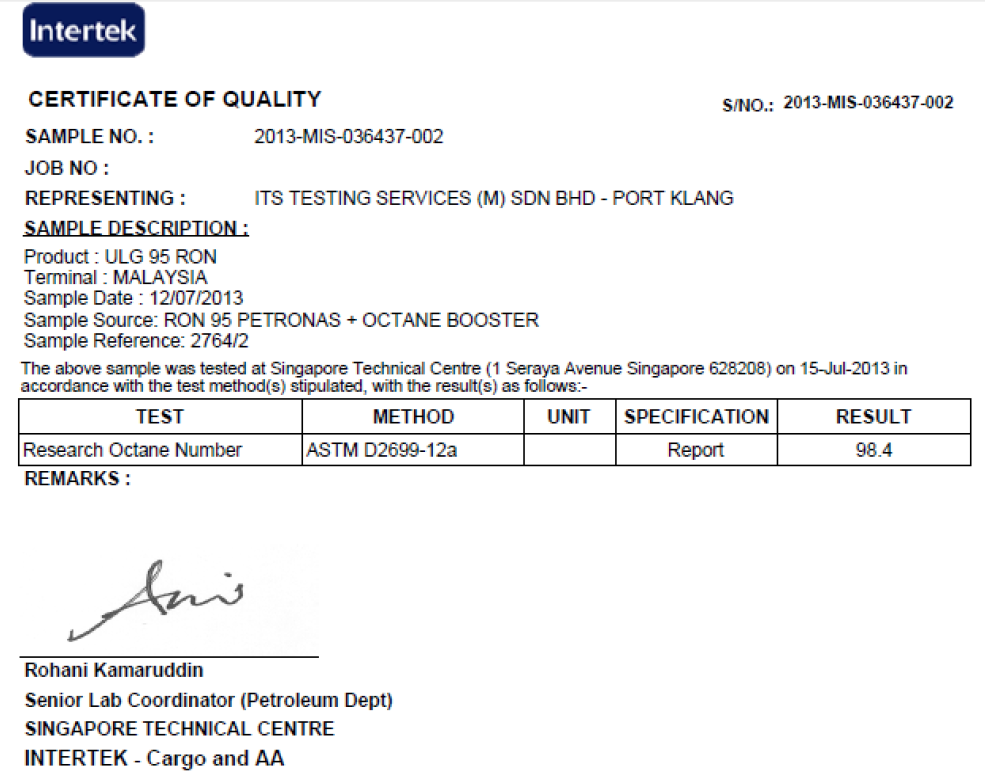 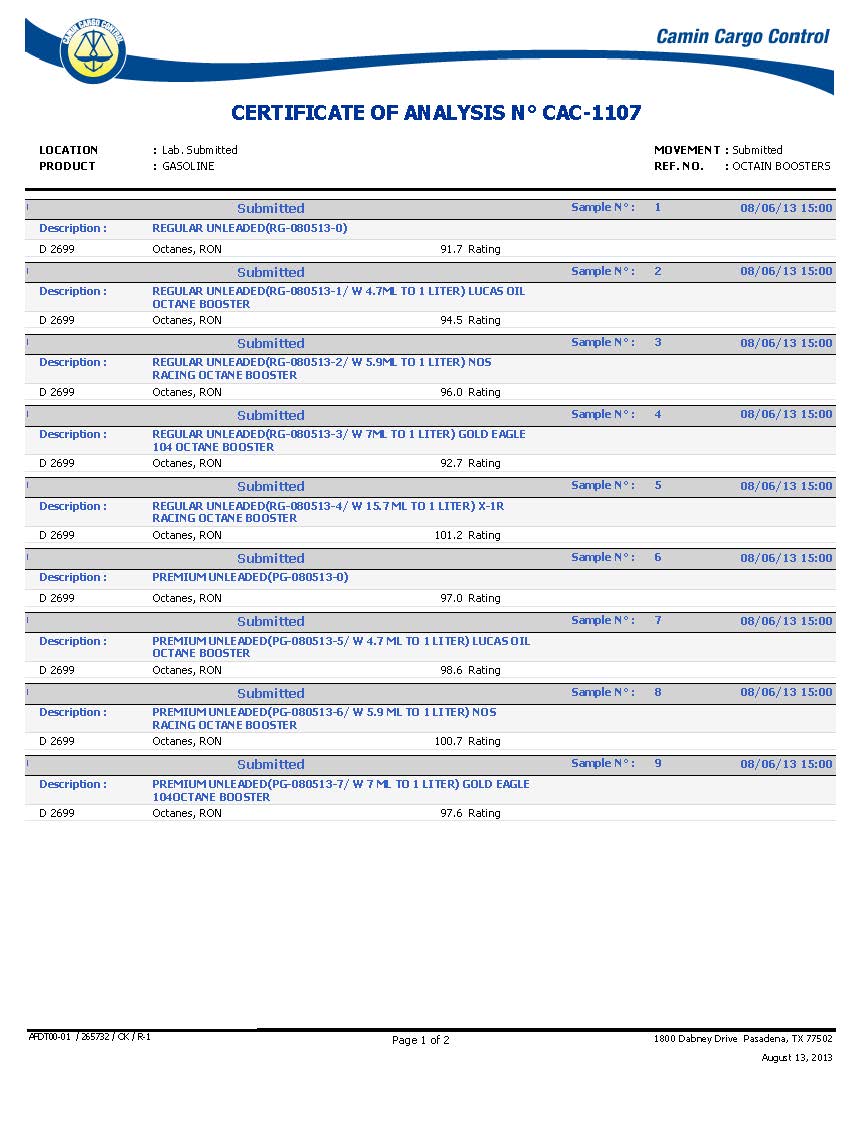 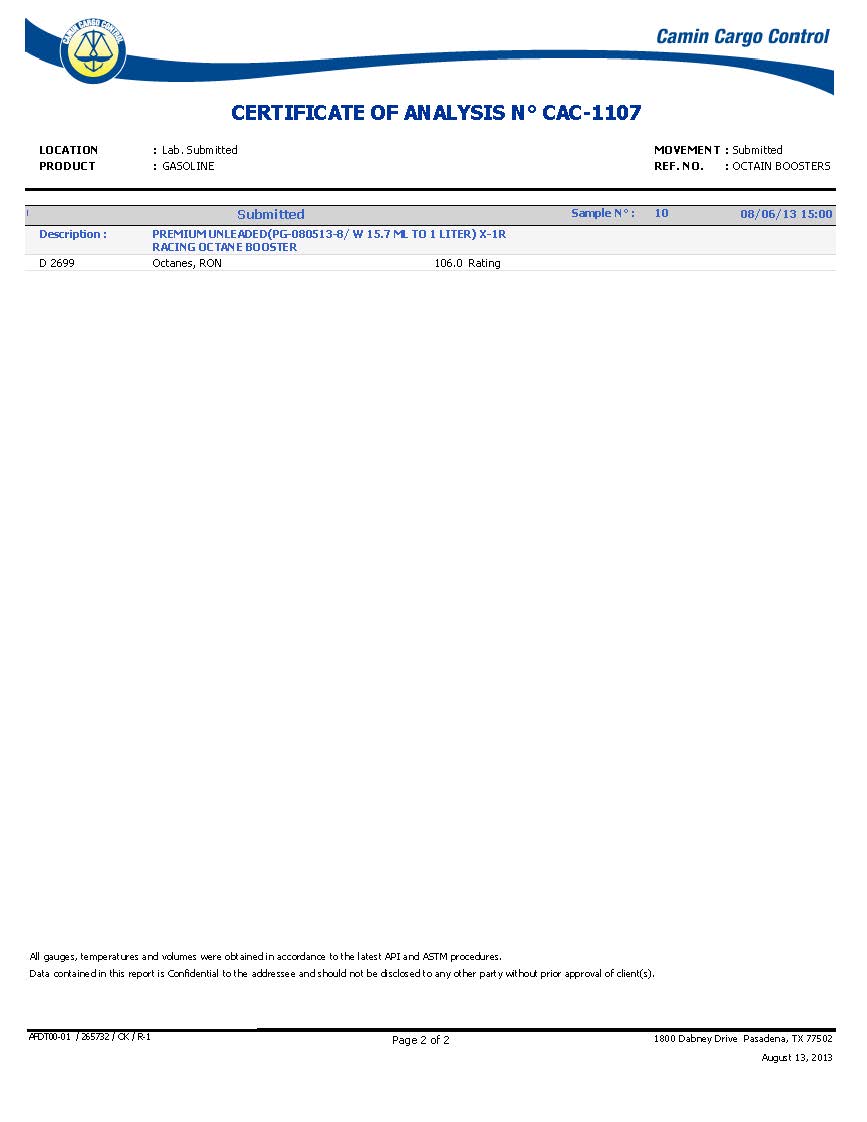 PREVIOUS X-1R Fuel Treatment – even your car needs vitamins
NEXT A Cleansing Flush!

Don’t want to missed our news?

Follow us on our social media to get or quicker updates and promotions!